The most common fouling on boat hulls are seaweed, moss, algae, barnacles that then become shells

Seaweed, moss and algae often sits very loosely on the hull while the boat is still in the water. It is easily removed by using a brush or scraper. With the Scrubbis-brush it’s very easy to reach it and to remove that sort of fouling from the hull. The fouling flows out perpendicularly from the hull and is therefore easy to scrape off with Scrubbis Hull Scraper SET.

But as soon as the boat is lifted above water surface the fouling settles on the hull as mucus and the hair starts to dry and harden the seaweed and algae. It then becomes much harder to remove. Despite using hull paint there can still be fouling on the hull. Then it’s very good to use Scrubbis to remove fouling from the boat bottom.

Leisure boats go approximately 10-30% slower at the end of the boating season compared to the start of the season. The fuel consumption also increases in the corresponding scale. This is due to fouling and/or mucus layer on the boat hull.

Barnacles are small crustaceans that have gotten a hard shell of lime as they grow and fasten on a suitable surface, for example the hull of a boat. Barnacles exist in saltwater and brackish water but not in freshwater. Barnacles can reproduce everything from once to several times per season/year. When barnacles have grown, they become a shell with a hard surface. Then you get the problem with shells on the boat hull. 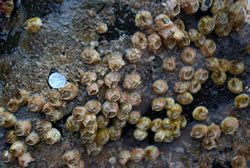 If the barnacle is removed at an early stage when it just has fastened, the shell is thin and easy to remove. Before the barnacles have hardened and become seashells. If you wait too long or if you take the boat up and the barnacles come in contact with the air it becomes a lot harder to remove the barnacles.

It is advised to use Scrubbis to reach the boat hull and remove the barnacles while the boat is still in the water.

In Sweden there is a website www.havstulpan.se where one can signup and receive a text when the barnacles are growing in your area. At that point you have 2-4 weeks to scrub the boat hull with the Scrubbis-brush, before the barnacles harden and becomes seashells. It is important to remove the barnacles in time while the boat is still in the water.

Scrubbis have developed a general and international alert system that consists of Scrubbis Indicator Plate and Scrubbis APP. With the App you can photograph and register the fouling on the Indicator plate. Everyone else who uses the app can see and receive the alert of when the fouling starts. Please read at the App-page for more information.

There are several alternative to how to prevent and how to remove barnacles and other fouling from the boat hull. Among the alternatives are brush washers, canvas, lifts, airless sprays, etc.

But the absolutely best, most effective and cheapest option in our would is Scrubbis!

Scrubbis is a cleaning tool, a type of hull brush, that is developed to be gentle to the boat hull while at the same time an effective tool to remove fouling from the hull. The cleaning head has a built-in buoyance at 2 kg that pushes against the hull.