Hull cleaning is a necessary pain, regardless of whether you are using hull paint or not. The fouling found on the boat hull can be seaweed, algae, moss, barnacles, shells, etc. It is important to clean the boat so that you avoid fouling. Boat cleaning is much easier when the boat is left in the water as the fouling is soft. Seaweed, moss and algae often sits very loosely on the hull while the boat is still in the water. It is easily removed by using a brush or scraper. With the Scrubbis-brush it’s very easy to reach and get the hull cleaned. The fouling flows out perpendicularly from the hull and is therefore easy to scrape off with Scrubbis. But as soon as the boat is lifted above water surface the fouling settles on the hull as mucus and the hair starts to dry and harden the seaweed and algae. It then becomes much harder to remove. Despite using hull paint there can still be fouling on the hull. Then it’s very good to use Scrubbis to remove fouling from the boat bottom. 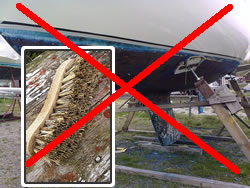 Recreational boats go approximately 10-30% slower at the end of the boating season compared to the start of the season. The fuel consumption also increases with up to 20%. This is due to fouling and/or mucus layer on the boat hull.

Mucus layer on the boat hull

Even though the boat hull is painted with hull paint and does not have any fouling on the hull, it grows a thin layer of mucus on the hull. The mucus layer creates small whirls in the flow, which in turn increases the friction between the boat and the water. This also reduces speed and increases the fuel consumption. Mucus layers can only be mechanically removed and no chemicals or hull paints can prevent it. The mucus layer sits very loose when the boat is in the water and therefore very easy to remove with your hand or with a brush. But as soon as the boat is lifted above the water surface and the mucus comes in contact with air, a hardening process begins, which makes it much harder to remove.

You can use a regular brush for the hull and clean it by hand. You do that by swimming around the boat and diving down below the boat to reach with the hull brush and remove the fouling from the boat bottom. With the Scrubbis-scraper the job becomes much easier. Scrubbis with its telescopic handle reaches all the way down below the boat hull, and without you jumping into the water.

There are several alternatives to hull cleaning and how you clean the boat from fouling. Among the alternatives are scrubbing brushes, brush washers, canvases, lifts, airless sprays etc. But the absolutely best and most effective hull brush in our world is Scrubbis!

SCRUBBIS is a cleaning tool that is developed to be gentle to the boat hull while at the same time an effective tool to remove coatings from the hull. The cleaning head has a built-in buoyance at 2 kg that pushes against the hull. You use Scrubbis when you have the time and motivation, and as often as you want for the same price.